There is currently no known authentic likeness that exists of James Dyson.

He was a prominent man of his time— merchant, land owner, Perth City Councillor—he was present at certain key events in the history of the city: He was definitely present at the opening of the Perth Town Hall, he was most likely present at the opening of the Perth Railway Station, The Wesleyan Church, Royal visit, parades… All these events were photographed, but there is no currently identified photograph of James Dyson. Even of his many, many children (with one notable exception that possibly explains the rule), no images appear to have survived.

The veracity of the sole written description that comes down to us of his appearance depends whether you accept (as I do) that he was a Van Diemen’s Land convict, in which case we have this documentation:

Now, it is possible to feed these details into an identikit program to generate an impression of what Prisoner 901 looked like. Best of all, there is such a program exactly for Australian Convict records, and when you run that program, you get this:—

(The only parameter I had to change was the eye colour that the program kept trying to make brown rather than the stated grey.) Try it for yourself!

Although he was a bit shorter than today’s average, a number of his sons were noted for their height… and width. (Given that the family were involved in both the butchering and baking trades, it’s a fair bet that improved diet had much to do with this). 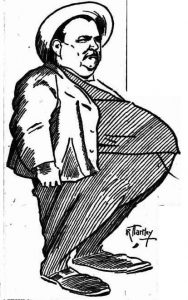 Going to the extreme (as always) was Andrew Dyson. Drewy achieved his greatest fame at the end of the nineteenth century for being the fattest man in Western Australia. He is (I guess, inevitably) the only child of James for who original likenesses exists*, and being Drewy, they exist in excess: many photographs, written descriptions and even cartoons.

Drewy Dyson also provides us with a very good idea of what his elder brother Thomas looked like. One day in May 1897 Thomas Dyson was hauled into Court to face Mr. Cowan, the Police Magistrate:— 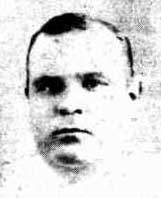 Traces of James might be seen in a scattering of images of his grandchildren. George Henry “Harry” Dyson (left) was Thomas’s eldest son and clearly shows shows the family similarity to his famous uncle if not also his grandfather.

Ellen Christina Edwards is sometimes considered to be James Dyson’s daughter although in all probability she actually was the daughter of Jane Devling (Dyson’s second wife) and her first husband Richard Edwards.

This image of one of her own daughters is interesting to compare how much of Jane and how much of James there might be in the many children they did have together. While we might have some sort of image for James now, for his wives we have less than nothing.

Including Ellen, Dyson had twenty-two children, nine of who would go on to produce offspring of their own — of those nine there would be only one surviving grandchild from the children of his first wife. (This happens to be the branch of the tree that I am descended from). Recently the existence of some earlier family photos of my Dyson family have become known to me and some of the blanks of a visual map that ties me to this family were filled in, but there is still so much missing. The appearance of Joseph Dyson, James’s eldest son remains a complete mystery to me.

What do you see when you see a family photo?

About ten years ago I started researching my own family history. As a graphic designer, it was perhaps inevitable that I would start by collecting and restoring family photos… Isn’t there a saying: “When your only tool is a hammer, every solution starts resembling a nail”?

Scanning and cleaning up the old photo albums was to make connections with how grandparents looked like their grandchildren, children like their parents… or not, as was my case. Then my siblings started families of their own, and in the faces of my beautiful nieces and nephews I saw the their parents, and grandparents, and back through the generations as far as the visual record stretched. What I didn’t see is me. When I looked in a mirror I didn’t see family, only a stranger stared back.

For until that time the only family I had ever known was my adoptive family.

To be utterly clear, they are and always will be my family. And 100% of the time me being adopted has been a non-issue. It had never been a secret; just a matter of fact— like the sky being blue, or that pineapple on a pizza is an abomination. —But there was something missing that until I found it I could not define.

The Dysons are part of my biological family. My maternal grandmother was born a Dyson. In 2009 we finally made contact. In 2017 she was 88 years young.

There is no one reason why I began my family history search, or why I continue with it—I refuse to differentiate between my adoptive and biological family trees — They are both integral to who I am, and that is possibly one of the answers, I feel a sense of completeness in myself that I had never felt before—that and the ability to channel the inner bastard that I know now to be integral to my heritage.

When I look in the mirror I no longer see a stranger.

Now where the hell is that photo of James Dyson I know must exist?