Or, the origins of Taxidermy in Western Australia.

You can’t believe everything you read in the ‘paper… Thankfully…

“…Ultimately, Yagan was shot by a young farmer named Feast on the Upper Swan, near Belvoir, now the property of Mr. W. T. Loton; Midgoroo being dispatched in a similar manner by a military guard in front of the Perth Gaol, now used as our Public Art Gallery. Yagan’s head is now on view in the British Museum, it having been preserved by Francis Fraser Armstrong, our first official interpreter of the native language, and our first embalmer of animals, birds and reptiles.”

If your stomach is strong enough, you can read the rest of this foul screed on the trove site by following the link. The article was triggered by the death of the widow of one of the first European botanists to study in Western Australia. His name was John Nicol Drummond, and you would do well to note that I refer to him as one of the first, and as a European botanist in Western Australia. I’m pretty sure Charles Frazer, the Colonial Botanist who accompanied future Governor Lt. James Stirling on the 1828 survey of the Swan River region prior to the foundation of the colony would pre-date him, even if he did completely misrepresent the fertility of the region to prospective settlers. Also the Aboriginal peoples of Western Australia around the South West region, known as the Noongyar, carried detailed botanical knowledge for generations prior to the arrival of the British. Some of their knowledge, particularly that relating to birds and animals, was eagerly sought out by the young man Francis Fraser Armstrong, who while he was the first to hold the formal title of interpreter as employed by the Colonial government, he was by no means the first or the only European to attempt to communicate in the Noongyar language before that moment.

However this article is about taxidermy, which I choose to define as the preservation of birds, reptiles and mammals, often by the means of drying and stuffing, and it should come as no suprise to you now that the claim for being the first embalmer in Western Australia made for Francis Armstrong in the above article can also be proved to be conclusively false. The motivation of the pseudonymous author of the above article is one of the subjects I explored in my thesis on Armstrong, available to read here, so I will not dwell on it further, other than to observe the author has deliberately conflated the story of Armstrong with one who has a far better claim to be the colony’s first carcase-preserver.

Armstrong was an amateur taxidermist, as were a number in the colony during its early days of existence. This newspaper advertisement placed by Armstrong himself was for the sale of taxidermy supplies. That there were other stuffers in the public at large must be self-evident as who else could he be selling glass eyes to?

That he was a skilled embalmer of dead things, particularly of birds, might be demonstrated by his business of selling sets of specimens of the colony’s fauna, advertised as early as 1842, and culminating in a noteworthy exhibition of his work in a colonial exhibition held in Melbourne, Victoria, during 1866.

To be fair, Francis Armstrong never claimed any primacy for himself, unscrupulous others did that. Armstrong was only a teenager in when he arrived in Western Australia in 1829, and his first few years in in the colony are well documented to be a stark struggle for survival for his family. Of those who would have a better claim to be the first documented taxidermist in Western Australia, George Fletcher Moore probably has the best case to make.

Moore (1798-1886) was a mediocre Irish lawyer who realised that immigrating in the first wave of settlers to the Swan River Colony opened up the chance of becoming a very big fish in a very small and shallow pool. He arrived in late 1830. So it was that he swiftly acquired some prime real estate in the Swan Valley and a highly lucrative position as one of the Colony’s top law officers. His inflated reputation as a historical figure today rests on the survival of his extensive and candid diaries of the first decade or so of the Swan River Colony’s existence. These were published in edited form both in the contemporary newspapers and as a book Diary of Ten Years Eventful Life of an Early Settler in Western Australia (London 1884). However, I would recommend the reconstructed and unexpurgated version of his writings: The Millendon Memoirs: George Fletcher Moore’s Western Australian Diaries and Letters, 1830-1841 edited by J. M. R. Cameron (Hesperian Press, 2006). It is this version I quote from here:

“…There are many of the same sorts of birds here as at home but differing either in colour or voice – crows rooks magpies cuckoos redbreasts wrens of a beautiful blue, and many others. I thought of making a case of curios, tho but as yet I assure you the necessity of attending to more important concerns supersedes that feeling. I killed a snake and stuffed it – a nameless sort of grey large headed bird, and a beautiful copper coloured heron but for want of time, I see the ants are destroying the skins.”

So while it is perfectly feasible for another settler or possibly a scientifically minded naval officer to have stuffed something before this, Moore’s diary is the earliest documented example I know of. Moore was not particularly fortunate in his hobby. Many of the specimens he sent back home to Ireland never arrived, and he was in close proximity to one particular “specimen” he was unable to add to his collection. Moore’s property was adjacent to that where the Aboriginal warrior Yagan was murdered on 11 July 1833, and Moore made haste to observe the body and admire the handiwork of the embalmer. 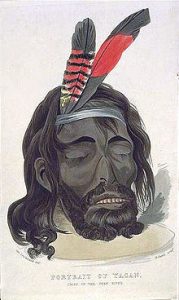 I forgot to mention on Sunday I saw at Mr Bull’s the head of Yagan, which one of the men had cut off for the purpose of preserving. Possibly it may yet figure in some museum at home. I should have been been glad to get it myself.

Moore later offered the man who preserved the head and the skin flayed from Yagan’s back (because it had an interesting tattoo on it) a job on his own property as a shepherd. William “Doctor” Dodd must also be another candidate to be Western Australia’s earliest taxidermist.

I was inspired to write this article after a visit to the State Library of Western Australia where I had the opportunity to have an interesting conversation with a staff member from the Western Australian Museum about what might be the earliest taxidermy specimen in the Museum’s collection and whether any of those specimens were the handiwork of Francis Armstrong. At the same time, I looked at two specimens on display there: A mountain devil (Moloch horridus, the same sort as mentioned above) and a Tawny Frogmouth (Podargus strigoides). Both were beautifully preserved and displayed. Time was taken to explain that both specimens came from creatures that died of natural causes and that no foul play was involved in their procurement.

Which lead me to think again about the earliest history of taxidermy in Western Australia. George Fletcher Moore regarded the carcase of a man he had enjoyed a conversation with some weeks before (admittedly Yagan had thrown a spear at him)  as merely an interesting subject for his collection, no different to a bird or reptile. I find his callousness and racism abhorrent. While we are in truth all animals, I doubt Moore categorised himself as fauna. Then there was Armstrong. He and his friends in the Noongyar community killed beautiful and rare animals in large numbers so he could stuff them and sell them to collectors. I find this disturbing for among other reasons: the disconnect between his admiring and supposedly respecting nature, then slaughtering it to fill a display case.

Yet these preserved animals dispersed to collectors and the occasional reputable naturalist and museum all over the world has spread the knowledge of the beauty and diversity of the natural world, all over the world. I myself was inspired by visits to the museum as a child, with their display cases and tableaux of animals in the wild. One avid collector and preserver of dead animals was a young natural historian called Charles Darwin. The skins of birds he collected from the Galapagos were many years after the fact an inspiration to him in his attempts to prove his theory of natural selection. (An irrelevant but interesting fact: Many years after Darwin’s sojourn, the ship he sailed on, the HMS Beagle, was employed to survey the north west coast of Western Australia)

So when I see a stuffed animal, I may admire the workmanship, I may admire the beauty of the animal itself, I must acknowledge its value as an artefact, but I must also feel disquiet, some discomfort. I think a measure of discomfort is not a bad thing to possess, sometimes.