On the 2 August 1852, James Dyson appeared before the Assistant Police Magistrate Charles Symmons in Perth and was fined eight shillings with costs for creating a disturbance the previous night. Those are the bald facts as presented in the local paper, which often preserve more details than survive in the official records. However, I discovered an exception: Police Magistrates sometimes wrote to the Governor via the Colonial Secretary’s office, and these letters were readily accessible on microfilm at the State Records Office (SRO) of Western Australia in Perth. I discovered that the correspondence mostly concerned re-offending convicts and rarely the day-to-day court processes. But I can safely assume from the later letters of Charles Symmons to the Colonial Secretary that on 2 August 1852 James Dyson was probably beating up his poor wife.

The wife of James Dyson, Sawyer of Perth, having been, in my presence, examined by the Colonial Surgeon, and reported by that Officer of feeble & unsound mind, although not actually insane, and as moreover, it has been proved before me as Police Magistrate, that the said woman is in the habit of being struck and otherwise illtreated by her husband who has received a woman of bad character into his house.

I have the honour to request that the said Mrs Dyson may be received as an inmate of the Government Lunatic Asylum, and in and of her maintenance therein, I shall make an order on her husband for the weekly payment of (8) Eight shillings.

I have the honor to be,
Sir,
Yr Very Obdt Serv
Chas. Symmons
Asst Police Magistrate

the Hon, the Col Secretary, Perth

The Governor of Western Australia, Charles Fitzgerald initialled his approval of this course of action.

Letters sent by Colonial Secretary to the Colonial Surgeon and the Assistant Police Magistrate of Perth:

August 6 1243
[To the] Colonial Surgeon
His Excellency having authorised the admission of the wife of a woman named Dyson into the Government Lunatic Asylum, I have the honor to request you will give the necessary instructions for her reception.
Dyson has been ordered by the Police Magistrate to pay 8/. a week towards the maintenance of his wife.

[To the] Asst Police Magistrate
I have the honor to acknowledge the receipt of your letter of this date applying for admission into the Government Lunatic Asylum for the wife of James Dyson from whom you will claim[?] the payment of 8/. a week. I am directed by His Excellency to enclose such admission.

But three months later Symmons was requested to update the authorities,—

[To] C. Symmons
Asst Police Magistrate
Referring to your letter of the 6th August last I have the honor by direction of His Excellency to enquire whether the weekly payment of eight shillings is duly made by James Dyson for the maintenance of his wife in the Lunatic Asylum. The Woman is a sower of much trouble and the sum ordered to be paid barely compensates for the annoyance experienced by the Matron from the lazy and filthy habits of her Patient.

In reply & gen’s of the 12th Instant, I have the honor to inform you that I have received from James Dyson payments at the rate of eight shillings per week for the first three months of his wife’s location in the Perth Lunatic Asylum. I shall pay the sum, (amounting to £4-16), into the hands of the Colonial Treasurer.

The Hon, the Colonial Secretary

This letter was annotated with instructions to be passed back to Mr Symmons. “…

Asst Police Magistrate
Perth
In acknowledging receipt of your letter of the 16th Inst reporting that James Dyson had made payments of eight shillings per week for the first three months of his wife’s location in the Perth Lunatic Asylum I am instructed by the Governor to inform you that he considers such rate of remuneration inadequate to the trouble and annoyance which this woman occasions to the
Matron of the Establishment and that Dyson should be called upon to pay an increased sum of ten shillings per week; in addition to which he should also deposit something to purchase articles of clothing for his wife’s
use.—

In acknowledging the receipt of your’s of the 18th Instant suggesting that James Dyson should be called upon to pay an extra sum of two shillings per week for the support of his wife now an inmate of the Lunatic asylum — I have the honor to report — that I find when inquiring that in this last 2 months Dyson’s employment as a Sawyer has been very slack, and his earnings comparatively small —

He professes his utter inability on making a more liberal allowance, considering that he has three children to support — & the present dearness of the necessities of life.

Dyson expresses his willingness to supply his wife with suitable & sufficient clothing.

According to his statement, she has 4 gowns, 2 other under garments, & consequently, could namely, he supposed, be in that want which your letter would infer.

I have the honor to be
Sir
Yr very Obdt Serv
Chas Symmons
Assist. Police Magistrate

And this was the situation until January of 1853 when it was the turn of Dr John Ferguson, the Colonial Surgeon, to write to the Governor. It was he who had responsibility for Fanny Dyson’s case.—

I beg leave to bring under His Excellency’s notice the case of Mrs Dyson, at present a patient in the Lunatic Asylum. Mrs Dyson has been an inmate of the Asylum for nearly five months, and during great part of that period has been under continuous treatment for her Disease, but I regret to say, with little or no benefit to herself — the knowledge that her Husband is living with another man’s wife, (a Mrs Edwards) has taken such a complete hold of her mind, and her animosity to return home has become so constant & intense that I consider her case, in this account a hopeless one for present treatment.

I would therefore suggest the propriety of sending her home to her husband – I’d not present to her such an opinion as to her for the Govt. can interfere in her case, to see that the poor woman receives, from her husband, that kind treatment which she so essentially requires, or whether on such it would be practicable to have Mrs Edwards removed from Dyson’s house to her own Husbands’, who, I am informed, is still willing to receive her – but I am clearly of the opinion that no good can come to Mrs Dyson herself, under existing circumstances, by a further residence in the Asylum at present.

I have the honor to remain
Sir,
Your most obedient Servant,
John Ferguson

The Governor’s response was chilling..

[To the] Colonial Surgeon
In reply to your letter of the 6th Instant relative to the case of a woman named Dyson now a Patient in the Lunatic Asylum I have H.E.’s directions to authorise your sending her in charge of a Policeman to her husbands House, and to refuse receiving her again into the Asylum. The matter must then rest with Dyson and the Magistrates.—

If there is more government correspondence about Fanny Dyson’s case, it has yet to be identified. If a policeman did escort Fanny back to her home he would also have observed that Mrs Jane Edwards— the other woman— was  just about to give birth to her first child with Fanny’s husband. Any possibility of reconciliation between any of the parties was most likely extinct by 27 April 1853 When James Dyson and the aggrieved husband of Jane brawled in the street. It’s possible Fanny stayed out of the Asylum for a time, but she was most probably back in the custody of the Government when she met her end.

There is only one record which contains an indirect mention alluding to her final and tragic fate. 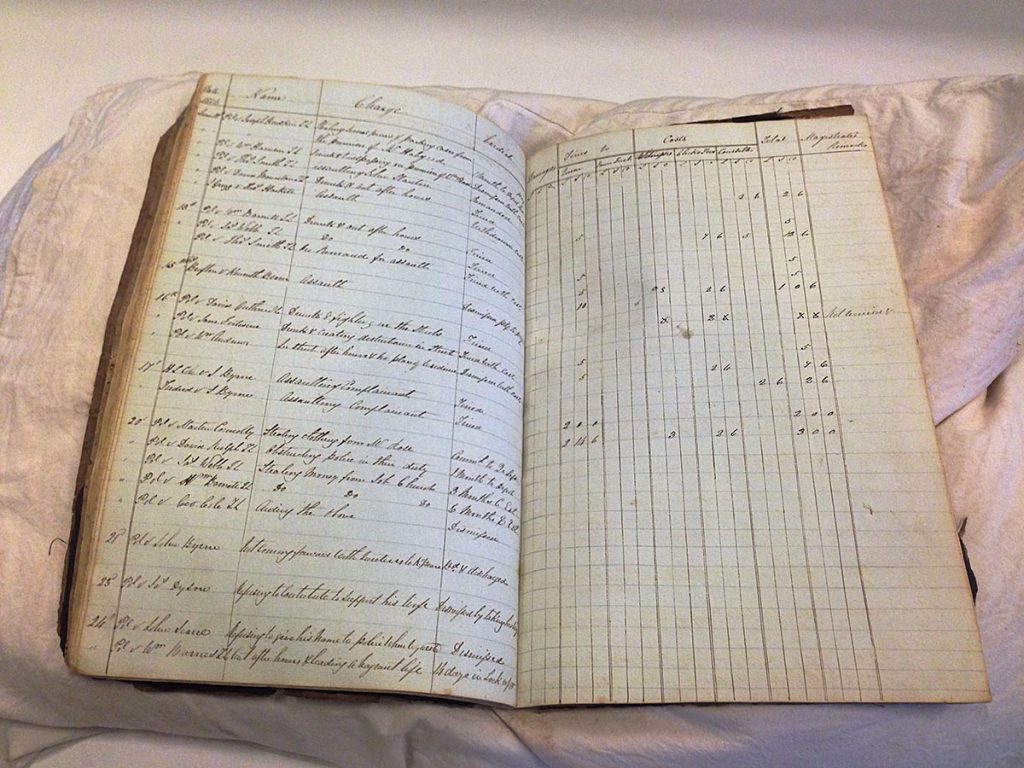 Original Police records for this era in Western Australia’s history are very rare. The newspapers published court business, but not every week, and not completely. This criminal indictment book from 1854 lists a case prosecuted that the local pressmen decided for what ever reason, not to report. On 25 June 1854, James Dyson was charged with:—

“Refusing to continue to support his Wife”

But the charge was dismissed. The reason given:—

“Dismissed by taking his [sic] life”

James Dyson certainly did not take his own life in 1854. Substitute “her” for “his” and it all makes tragic sense.