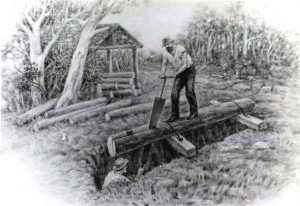 James Dyson had built something of an empire in Western Australia on the back of supplying timber sourced the old fashioned way—by hand. Pity the other pit-sawyer though, who had to stand in that pit when the logs were being sliced into planks, and pity also the poor sap (pun intended) whose on-the-job-training did not include lessons where not to stand when the tree fell.

Dyson’s business portfolio included more than just being a timber merchant, so his decline from being one of the largest employers in the colony to near penury cannot be attributed solely to competition in the timber trade, but one of his sons shooting a business rival’s son in the head would not have been conducive to any sort of cooperation when Benjamin Mason (father of the wounded party) together with his partner Francis Bird took the next logical step and introduced steam-powered machinery into the timber cutting process.

Bird & Mason’s business was conducted on a scale that Dyson’s business model might have been unable to complete with. They also employed  many convicts. In 1864, they built a new mill at a place called Bickley Brook in the Darling Scarp east of Perth. Steam power was used to run a circular saw. On horse-drawn railway tracks, cut timber was carted to a landing site on the Canning River and sent down in barges to Perth and Fremantle. The traces of the posts that made up the path for the horses that dragged the barges across the shallow waters can still be seen today.

Although Mason and Bird’s enterprise was not to survive the test of time, even better resourced companies would arise to carry on what they had started. But Dyson while was unwilling or unable to make the transition to the mechanised future of timber processing, other members of his family might not have been not so reticent.

Back in the “Old” Country…

Dyson’s father, Joseph, had been a cotton-spinning machine seller. That put him on the cutting edge of technology for the late eighteenth and beginning of the nineteenth century. His other sons who were not juvenile delinquents: Andrew, William and Joseph, all were involved in the spinning and weaving processes for cotton that was increasingly being centralised in powered mills, rather than in private homes and tenements such as their father had serviced. Bower Mill in Hollinwood, near Oldham, was initially an unpowered factory; it had been built for rope making, and that process was by hand. But during the same period of the 1860’s when James Dyson’s hand timber sawing business was at its peak, his brothers converted the ancient building to process cotton using coal fired steam engines.  Across the road from the mill was a Colliery, a seam of coal even ran underneath the mill itself. It should have been a match made in heaven, but instead subsidence in the mining tunnels caused severe damage to the floor of the factory. Not to worry though. After the inevitable protracted legal tussle, the two surviving brothers Andrew and Joseph won a frankly gianormous sum of money in compensation.

Back to us Luddites.

The Swan River Colony that James Dyson found himself in what was possibly the most isolated British settlement in the world at that time (prepares to be bombarded with other examples). News from home was six months away at best (Home being defined as the British Isles in this case). The nearest neighbouring colonies were weeks away by sail, or more. Technological progress took some time to filter through to what was essentially an agrarian economy, but you’d be daft to think they weren’t aware of progress happening elsewhere. When steam ships eventually regularly paid visits to the western third of the Australian continent, they would bypass Perth entirely and call in at Albany on the far south coast for coaling. The coal they required in vast quantities had to be imported to the colony. King George’s Sound and Princess Royal Harbour were simply more sheltered locations to complete this laborious work then storm swept Gage Roads.

The Government imported a steam dredge at vast expense  in 1869 to reclaim land on the Perth foreshore and to deepen the river estuary. Like the other much derided plan of the time—The volunteers wanted a troop of mounted rifles, but their C.O. wanted them to be mounted artillery, the dredge was the subject of active derision.

Eventually the dredge did fulfil it’s promise, but the joke is still on us. After all the resources expended in reclaiming the foreshore for the public, a more recent government decided that this very same foreshore should have a large hole dug into it so rich people could pay a lot of money to stay in buildings around it. The pointless inlet that was created was about as popular as the dredging machine that had first filled it in, nearly 150 years ago.

By 1871, even as his businesses were gradually running down, more and more of James Dyson’s attention may have been on his civic duties. He was on the council of the Perth City and the Perth Road Boards respectively. That year the members of the road board went to inspect a new timber cutting machine. I would be interesting to have heard Dyson’s reaction.

During his time on the City Council, both the electric telegraph and the first steam powered fire engine was delivered to the city.

Dyson’s sons, you would imagine, would have been more in tune with new technology. You would mostly be wrong. Horse power was their limit. Their father had been born into the white heat of the cutting edge of the industrial revolution, which might have been why Thomas, Andrew, John and possibly Matthew were apprenticed as blacksmiths, but only Andrew and Thomas did any manufacturing. They had been born and grown up into a poor, rural and insular corner of the British Empire, where (essentially) a slave labour force rather than ingenuity was what got things done. Thomas had the most success mass producing furniture, but he went to Victoria. (Maybe shooting your father’s business rival’s son hadn’t turned out to be such a bad career move after all) Andrew built coaches (when he wasn’t on the bottle or behind bars) John ended up digging coal.

Andrew Drewy Dyson for all his many flaws, was no simpleton. He understood marketing. He was praised for his craftsmanship, (which was considerable when he stayed away from the bottle).  So when the first steam locomotive came to town in 1880, take this tale of the country yokel with a massive grain of salt, after all, Drewy probably wasn’t even there…

THE RAILWAY.
A week-end contemporary which specialises in reminiscences of Old Sydney should stick to yarns of Chowder, Clontarf, Surry Hills, the Argyle Cut, and other haunts of Noo South pushdom.

Recently it printed, a picture of a railway locomotive in the Perth-yards, attached to some seated trucks, and labelled it “The First Railway Engine Used in WA” The letterpress goes on to say it ran on the Fremantle-Guildford line, and was the pioneer of all such traction.

As a matter of fact, there was a well-equipped State-owned railway line between Geraldton and Northampton long before the Fremantle-Perth Guildford line was thought of, it being used for the cartage of passengers and base metals.

When the Perth-to-Fremantle line was nearing completion a popular query amongst the younger of the local population was as to how the engine and carriages would dodge the trees en route.

The elders explained, but the juvenile native-born, were a bit sceptical.

The day arrived when the first Puffing Billy was to arrive in Perth from the Port, and the population of the capital gathered in expectant, half-doubtful multitudes where now is the Central Station.

After a long wait some of the crowd voiced the opinion that the train wouldn’t be able to find its way up to Perth, and made bets of kangaroo skins, logs of sandalwood, etc., that black trackers would have to be sent out to bring it in.

Finally, a loud, long-continued whistling was heard from the bush where now is Leederville. Later it sounded from about West Perth, and owing to a temporary break in the line the engine remained there some time, occasionally whistling to let the waiting crowd know it would be soon coming along.

“There you are!” roared Drewy Dyson, who had been one of the most consistent pessimists; “it’s lost in the bush. Listen to it coo-ee-ing” ! ! !