Consider this a sequel to the article The Stranger in the Mirror where I bemoaned the lack of available images of the earliest generations of the Dyson family in colonial Western Australia.

Of the patriarch, James Dyson—at best, we have an identikit image based on his alleged convict record. Of his two wives, and the vast majority of his twenty-two children (his own and the one he inherited), we have little or nothing.

It unlikely there ever will be any images to be found of the seven who died as infants, children or teenagers. Then there were his children who lived to adulthood but never were able to have children of their own. If their photographs survive in any anyone’s family album they may not even have a name attached to them.

Then there were the regrettably prominent number of Dyson’s children who had families but probably shouldn’t have. When the going got tough, these big tough men ran like hell. Sometimes their families survived, sometimes they did not. It’s nearly seventy-five years since the last of James Dyson’s children passed. I can’t really blame the descendants of those who were abandoned for not keeping the family portraits—assuming they even possessed any in the first place.

The family of John Dyson (1860-1913) is one example. He abandoned his three young surviving children after the death of his wife in Collie in 1906. Many decades later one of his grandsons had the temerity to ask a question about his grandfather’s family. The conversation went something like this:—

Andrew “Drewy” Dyson is the metaphorical and literal elephant in the room when it comes to any discussion of Dyson’s children. There are seemingly more images of Drewy than the count of all his siblings, and this was a man who also ‘enjoyed’ a turbulent family life. Until a short time ago Drewy was the only one of Dyson’s children for whom a photograph was known to exist— And being Drewy, this meant many photographs were available. 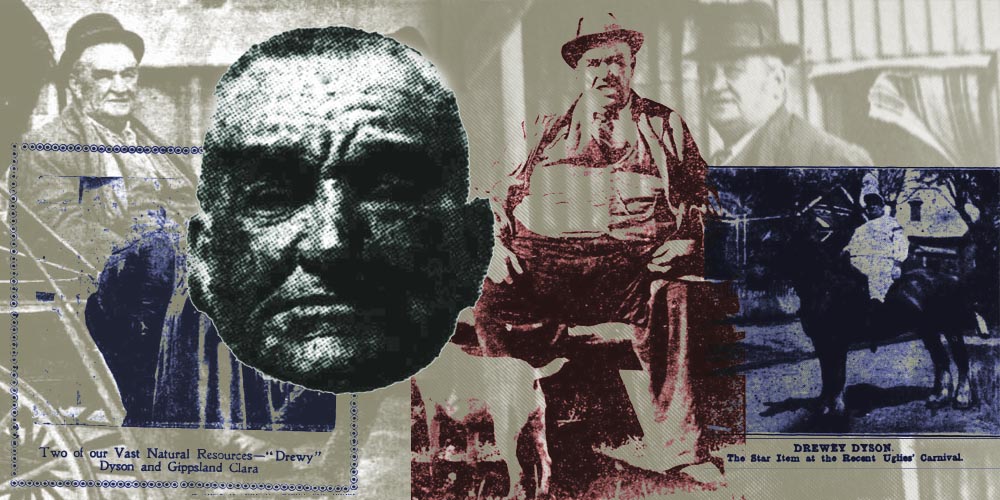 They date mostly from towards the end of his life, from the mid nineteen-tens to the time of his death in 1927, and are a testament to how much the press of the day loved him for his ability to fill column inches of content in the scandal section for pretty much every newspaper in town.

But there is now in circulation the image of another of James Dyson’s children, and dating back to 1906, this is the earliest photograph of a Dyson that I know of.

I have a good reason for not reproducing the full face here. This image appears in the book “Prisoners of the Past“, Compiled by Calliope Bridge, Celene Bridge, Angela Teague, Mark Chambers & Tom Hogarth and published by Hesperian Press in February 2017. The book contains mug shots of all prisoners released from Fremantle Prison between 1899 and 1919. There was a certain inevitability that one or more Dysons would be among their number.

Octavius Charles Dyson was the youngest surviving son of James Dyson and Jane Devling. I was not planning to ever say to too much about Octavius on this blog. His wife, Maud May Broun, (niece of Western Australia’s first Colonial Secretary Peter Broun) was finally able to divorce him in 1922 and a good thing too. One of his sons died on the battlefield of the Somme aged 20 during the first world war. Another drowned in the surf off Scarborough (The Perth suburb, not the English town one) in the mid 1930’s. This one may also have had a hand in introducing mechanical refrigeration into Western Australia.

All I have to go on about Octavius Dyson as a person is his criminal record as listed in the pages of the local papers of the time. It is not pleasant reading. However this is not the reason I obscure his face. I suspect the photographs published in “Prisoners of the Past” are all in the public domain and I likewise suspect that if I had asked I could have got permission from someone to publish in full what is, after all, a 112 year old image. I don’t because the publishers of “Prisoners of the Past” have taken the time and effort to make this material available to the general public and both the book’s introduction and this review by Julie Martin on the Western Australian Geneology Society Web site make it clear this is very rare material indeed.

If you want to see the picture buy the book, and make sure that those who try to make this stuff available get some sort of encouragement.

“Prisoners of the Past” is available for sale from the Hesperian Press. I have also seen copies for sale at the bookshop of the Alexander Library in Perth.

A dear friend. I was in awe of everything she had achieved and could never quite believe that someone of her stature showed me such kindness and encouragement. Never felt worthy of her praise. Will miss her so much.
p.s. I know she hated this photo.

Spent far to much time on this...
http://www.warpedtime.com.au/encyclopedia/locating-the-united-service-tavern/

http://www.warpedtime.com.au/encyclopedia/rank-hypocrisy/
The origin story of the United Service Hotel none needed to know

This arrived in the post for me today. I was worn down by too many gifs from ⁦@MoviesSilently⁩

Nice to have actual plans to work from...