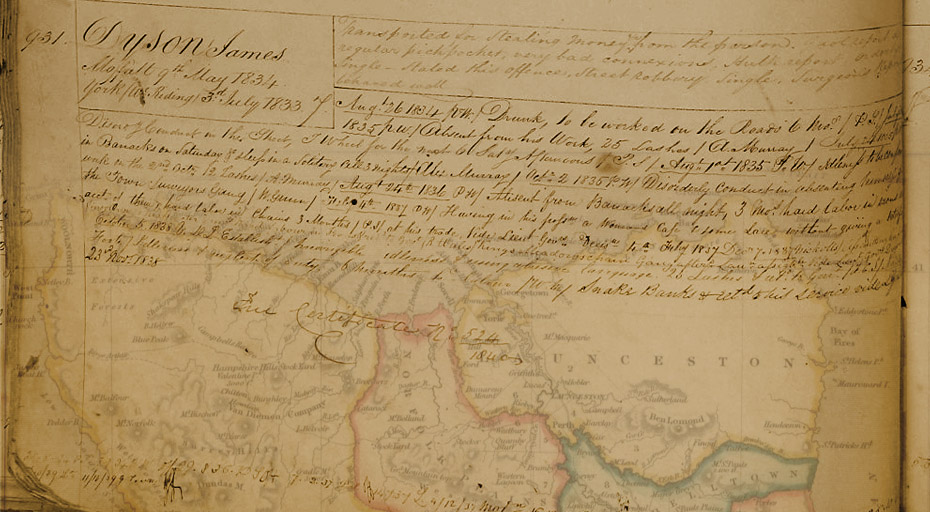 James Dyson served seven years as a convict in Van Diemen’s Land (now Tasmania) between 1834 and 1840. He arrived in Hobart Town on the convict ship Moffat on 9 May 1834. Until 1837 he worked on the road gang in that town, Then he was transfered to northern Tasmania around the Launceston district and was assigned to various masters in the area. He was never granted a ticket-of-leave or a conditional pardon and served his sentence until it expired on the 3 July 1840. He left the colony a year later for the free settlement (one without convict labour) of Western Australia.

He was not a model prisoner, although his long record of malfeasance while in bond should be seen in context over a seven year sentence. Below is an attempted translation of Dyson’s official record as a convict. It is hoped that some more flesh can be applied to these bare bones of history:

24 July 1835
[Public]Works
Disorderly Conduct in the Street,  T[read] Wheel for the next 6 Sat[urda]y[s] Afterwards
T.S.

Oct 2 1835
P[ublic] W[orks]
Disorderly Conduct in absenting himself of work on the 2nd Oct. 12 lashes
[Ordered by] A[lexander] Murray

Febry 4th 1837
P[ublic] W[orks]
Having in his possession a Woman’s Case & some Lace without giving a satisfactory account of these, hard labor in chains 3 months
(P[ublic Works] S[uperintendant])/
at his trade, see Lieut Governor’s Decision, 4th Febry 1837