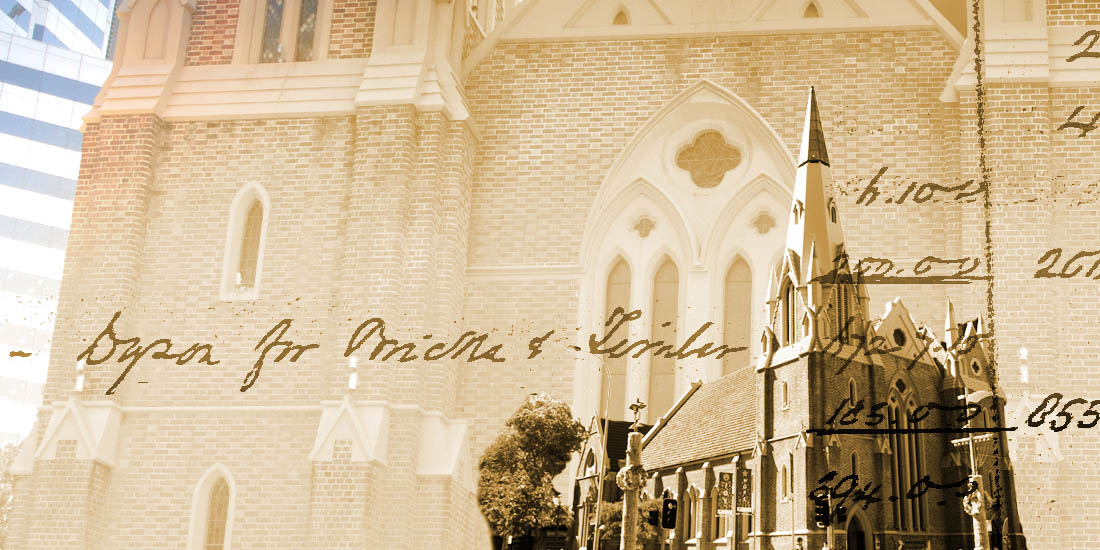 Today is a red-letter day.

Today I found the smoking gun.

Dyson, the Perth marine-store dealer of Falstaffian brawn, is connected with the Groperopolis Wesleyan Church. Leastways his father built it. Old man Dyson, the yarn rues, had to wait a deuce of a time for his money.

This Dyson, is of course, Drewy, and the church his father James was supposed to have built, is the Wesleyan Church on the corner of Hay and William Street. Completed in 1870, today it is one of the earliest surviving buildings in Perth.

Aged nine in 1867, Drewy claimed to have worked on the build himself:—

Finally, there was the famous article and photograph of Drewy and “Lemonade Joe” Moor from 1922 which mentioned how the two assisted a Mr Carson to build the weather-cock on the Church steeple.

That seemed to be enough evidence:— James Dyson had built the Wesley Church, where his son Joseph would later be a Sunday School teacher and another son would be convicted of throwing eggs at the parishioners…

… Then I read all the official Wesley Church histories I could find… There have been a few over the years, mostly by pastors past and present, and the tale they tell is of progress ever upwards (never quite explaining the utter irrelevance of the movement by the later half of the twentieth century and beyond).  The most recent, however, was not written by a cleric, so was refreshingly open about some of the less than saintly shenanigans  surrounding the institution. Thea Shipley’s Full Circle: A History of Wesley Church Perth was published in 2003, there was a whole chapter devoted to the construction of the church building. Because I felt I could this author’s credentials not to sugar-coat the history, and because there was absolutely no mention of any of the Dysons in any of the earlier histories either, I was forced to the conclusion that James Dyson’s role in the construction of the church was yet another Drewy Dyson fantasy. Benjamin Mason, Dyson’s rival in the timber trade was definitely recorded as having provided timber, and William Buggins, a well known builder of the time (and also connected to Joseph Dyson’s in-laws’ family) was mentioned to have overseen construction, that clinched it for me.

It was not impossible that Drewy had miss-remembered which church his old dad had worked on. Construction on the first St George’s Church commenced a few years before James Dyson arrived in the colony. By March 1842, progress was still crawling as the iron roof ordered from England failed to arrive. As was noted in a later history:—

“It was then decided to make a wooden roof locally and the sawyers in the Colony combined to raise the price of timber for the purpose.”

James Dyson was on the ground by now, and this sounds exactly what I would have expected him to do…

Even if he did not contribute to this initial phase, he was certainly involved in a later extension to the church in 1862.  (It is important to note that this is not the same Cathedral building that stands today, which dates to the last years of the nineteenth century)

Also involved in this extension is the same Mr Buggins previously referred to. Given that both he and Dyson are mentioned together for this project, but Buggins alone is mentioned in the Wesleyan histories, it begins to look like Drewy’s memories might have been at fault.

The work on the original St George’s Church was famously slow and ill-funded and the story that Dyson did not get paid for a very long time rang true for his involvement with that project. On the other hand, the Wesley Church of 1870 (the second of its name), was begun in 1867 and was largely funded by the Shenton family, in particular, their patriarch, George Shenton (senior). When Shenton died suddenly and unexpectedly at sea in 1870, shortly before the building was opened, the outstanding sums were paid by his family as a tribute his memory. This was the same Shenton Dyson bought his swamp from, and whose son, who would have paid the final bills for the church, would buy it back from Dyson some years later. Shenton senior had gifted to Dyson a family bible on the occasion of his (eventual) marriage to Mrs Jane Edwards. Given this history, it  did not sound right to me that the Shentons would not pay their bills on time.

Here my investigations might have ended with the the conclusion that:—No, James Dyson didn’t build the Wesleyan Church, but his kids might have watched with interest, given that the family only lived a few houses down on Murray Street…

Then the trail led me to William Traylen, Methodist Pastor in Western Australia. He arrived in the colony only days after the death of Shenton, and was one of the first speakers from the pulpit of the newly consecrated church. He was involved in the temperance movement, and his name had arisen in conjunction with Joseph Dyson’s  activities in the same sphere as mentioned in the article concerning the mystery of Dyson’s Hotel. While researching further, I learned he kept a diary, some of which survived and has been published.

I tracked down this book (compiled by one of his ancestors), and found something that none of the official histories of the Wesley Church, Perth, had deigned to share with us*— It was a reproduction of an 1867 ledger during the construction phase of the church, and it revealed what the public record had tried so hard to obscure—

*(I do not include Thea Shipley in this complaint. Her manuscript was published posthumously and who knows what was cut out, or never written.)

Buggins, Mason, and James Dyson — all together on the ledger — all paid by the building committee of the Wesleyan Church. Dyson supplied both Bricks AND Timber and was paid £672, 7s and 10d. Yes, he built the Wesley Church; No, Drewy was not lying… for a change.

Today was a good day….