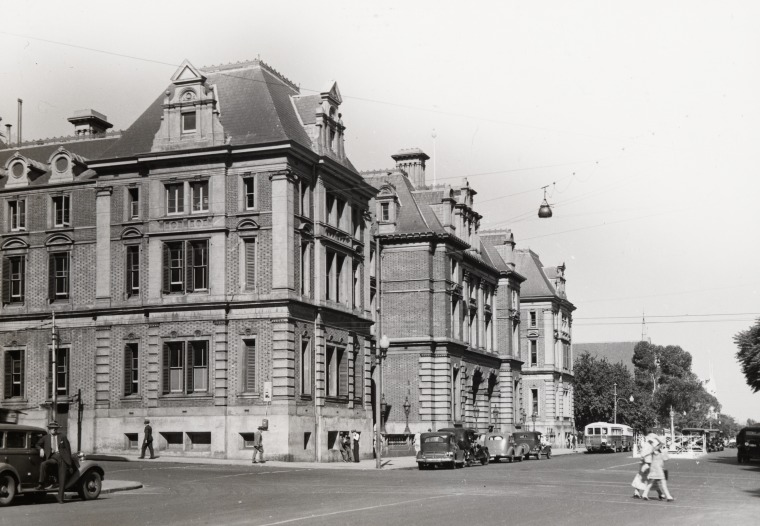 “Poste Restante” is a French term that can be roughly translated as “remainder post“. It refers to when a letter is retained by a post office for collection in that building. Joseph Dyson, junior, ran the Poste Restante department within the central GPO building in Western Australia. Prior to the Federation of the Australian Colonies in 1901, each Colony had its own independent Postal service. These were all rolled together to form what is now known as Australia Post in 1903. The Western Australian service had a fairly grand headquarters on the corner of St Georges Terrace and Barrack street, on the exact site of what had once been the original soldier’s barracks for Perth. The Perth GPO then moved to an even grander structure completed in 1923 and the old building became home to the State Government Treasury Department. What is quite amazing is that both these structures, the Treasury (as it is now known) AND the Commonwealth GPO both still exist in 2017, and both have been sympathetically restored.

Back in 1901, the building had then only recently been completed, but with a decade, it would be deemed too small.  In five years Joseph Dyson had risen through the ranks from letter carrier to head of the department. The workings of the Poste Restante were fully described in a rare article by a journalist who had conducted a full tour of the establishment. The complete article, archived on Trove, is reproduced below:

HOW IT IS WORKED.

The recent alterations to the Post-office, together with the new arrangement for receiving letters at that institution, have been fully described in “The Morning Herald,” and a brief reference made to the working of the various branches of this great and important department. In order to gain an idea of the working of the sub-branches, a representative of ‘The Morning Herald’ called at the Post-office yesterday, and, accompanied by an officer of the department, went through the poste restante and the letter carriers’ divisions.

Nobody could form an idea of the amount of work which this branch of the General Post-office carries out daily. Something like 21,200 letters, besides newspaper packets and registered documents, are dealt with weekly by the staff. The offices occupied by the staff are situated on the eastern side of the Post-office hall, where letters addressed to the General Post-office are delivered as called for. The sorting of letters for private boxes and for the various Government departments to be called for entails much labor, and calls for alacrity on the part of the officials. There are 250 private boxes in use, from which the department obtains an annual rental of from one to three guineas each, according to the size of the box, which must be regulated according to the extent of the correspondence for the various firms. The advantages gained by business people through the introduction of private boxes cannot be over-estimated. The letters are placed in the private boxes, and may be extracted by the addressees perhaps hours before they would be delivered to them per the medium of the letter carriers. Besides this, there is an other distinct advantage to the box holders, as they are able to obtain letters at any time between 7 o’clock in the morning and 10 o’clock at night. The letters are immediately sorted into the boxes on the arrival of all mails, and it is therefore surprising to find that out of the 378 boxes in position only 250 are in use. The delivery windows, which are open from 9 a.m.. to 6 p.m., provide, plenty of work for a large number of the staff. In the boom time, before people from the other States had established homes in and around Perth, the number of letters delivered daily was so large that six men were constantly engaged sorting and handing out letters from the delivery windows. The number of letters passing through the Post-office has largely increased since that time, but now that the people are settled, and have fixed residences, the majority of the letters, packets, and newspapers are delivered by the carriers. But even, now the work of delivering letters addressed to the G.P.O., Perth is no sinecure.

There are three delivery offices, the first being for letters from A to G, the second from H to M, and the third from N to Z, besides an additional box for taxed letters, and communications addressed to foreigners. At each of the first three boxes the principal work is that of sorting the epistles alphabetically into 108 pigeon-holes, so that they can be delivered when called for without the delay that would be experienced if all the communications addressed to people whose surnames commenced with, say, B were placed in one pigeon-hole. As it is now, persons can be informed in a few seconds whether there are any letters addressed to them, and if there are registered parcels they are given a ticket and sent to the registered letters’ office. Then there are many additional duties to be performed. One that occupies considerable time is that of re-addressing letters sent care of G.P.O. to private residences, in accordance with instructions sent in by the addressees. After being redirected these letters are despatched to the letter-carriers’ room, where they are sent out with the greatest possible speed. When an eastern mail arrives, the officers are often kept busy until 10 or 11 o’clock in the night— for which no allowance beyond the usual departmental leave of absence on full pay is made— the rule being that all mails must be sorted straight away, so that lessees of private boxes shall receive their correspondence without any delay whatever. For the work performed the staff is not a large one, although it has been increased numerically during the past few weeks by an innovation which has been resented, to a certain extent, by many officers of the service.

Hitherto the work of delivering the letters at the G.P.O. was carried out by male officers ; now women carry out the duties. The alteration was brought about in this way. The increased business throughout the General Post-office necessitated the engagement of further hands, and with a view to economy women were engaged to deliver letters at the boxes, their predecessors being removed to other branches of the department. The women are not overworked— and certainly not overpaid — for their time does not average more than five hours per day. The work is tedious, but with five hour “shifts” the strain imposed on them is not great, and they appear to be contented with their yearly salary. The work was previously carried out by half the number of male officers, but as each of the women employed receives a salary of only 60 guineas per annum, the department is gaining a slight saving by the new arrangement.

The branch is under the control of Mr. Joseph Dyson, and is in every respect up-to-date. In addition to the staff of women, two private-box sorters and two assistants are constantly employed. The introduction of female officers was not at first regarded favorably by the male employes, but it is believed that the system is now working satisfactorily.

During the Second World War the basement of the Commonwealth GPO building in Perth was converted into an air raid shelter, and the vast majority of the old Colonial Postal records that were stored there went into whatever the 1940’s version of the skip was. Within the records of the State Library of WA however, are a handful of group photographs of the staff of the during the early days. 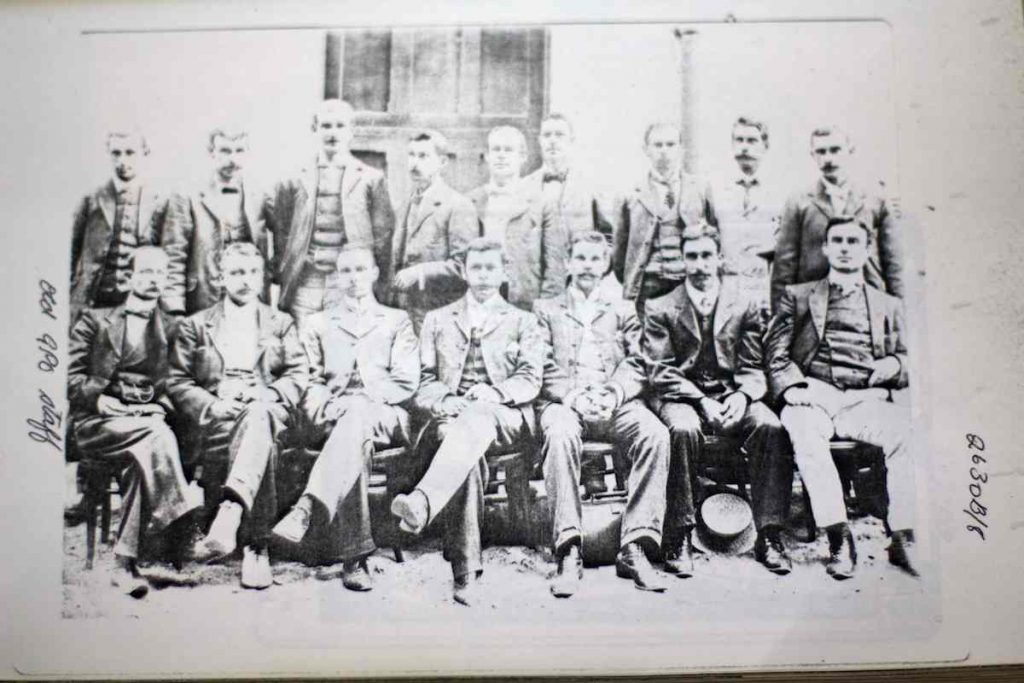 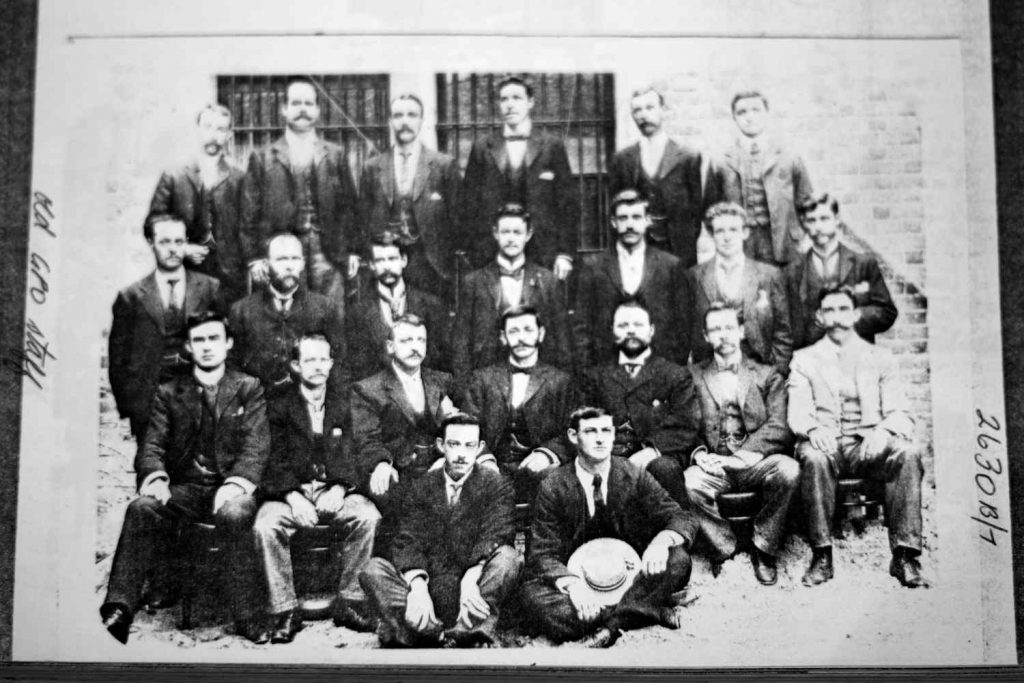 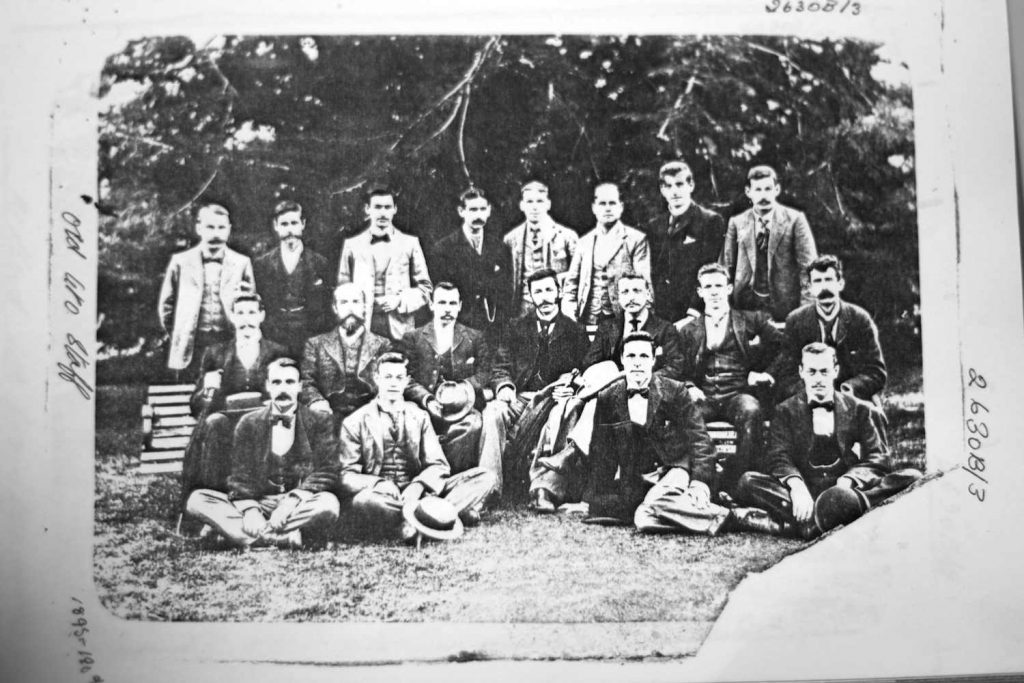 It may be that Joseph Dyson is in these photographs and I just don’t know it. This final image was taken on the steps of the new Federal GPO in Wellington Street. It must date from the 1920’s. Note the presence of ladies…: 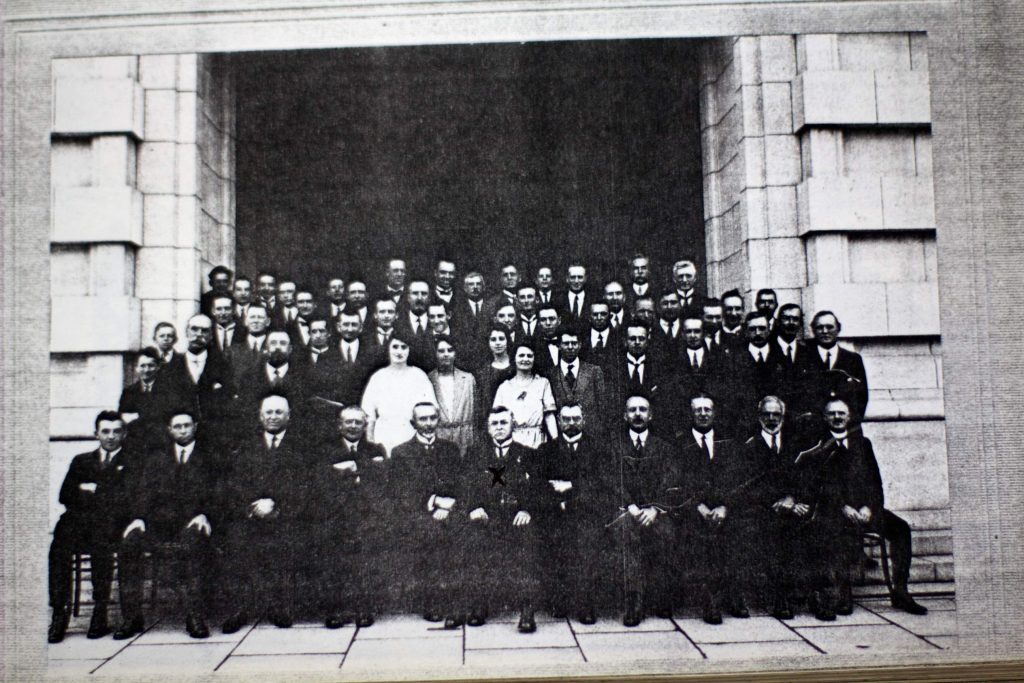