It should be clear by now that I have no problem mocking my ancestors— when they are bullies, pompous, arrogant, do monumentally stupid things, or are just so completely and utterly full of themselves it is all too easy. Of course, most of whom I have written about so far have been blokes. That’s because the blokes loved talking about themselves (and other blokes) to the exclusion of all else. Their life’s details were recounted by yet more blokes with very fixed ideas about what was worth recording and what was not. Now every single one of these blokes had a mother. A goodly proportion of them also had wives and daughters. You might not realise that from the surviving records.

And here’s something even more shocking for you to process;  ALL of your ancestors both male AND female engaged in the act of sexual intercourse, and what’s even more horrifying, some of them actually enjoyed the experience and voluntarily repeated the process more than once.  You can go take a cold shower now.

Mary Chapman, Margaret Gunn, Sarah Coe, Sophia Borghart, Frances Hoffingham, Mary Ann Spencer. These are all women in my direct ancestry going back eight generations and are part of an even longer list for which there appears to be no information on at all apart from their names. In the surviving records they they have no friends, back story, loves and losses other than as appendages to their respective spouses.

The name of James Dyson’s own biological mother in Lancashire is not known, but she did indubitably give birth to him at some time around 1810, presumably she knew his father. Even the actual spouse of his reputed father, Hannah (nee Binns) is only a name, existing in the records solely as the the daughter of a father, wife of a (philandering) husband, and mother to (most) of his children.

Of James Dyson’s first wife Frances (or Fanny), no two documents can even agree on the same family name.  What is confirmed is that he exchanged her in for a newer, younger model, the still married Mrs Richard Edwards (junior). Her maiden name was Jane Develing.

Now I am in a slightly tricky position when writing about Jane. I am a descendent of Frances, Dyson’s first wife. I also happen to be male. If I adopt my usual snarky tone with Jane’s story, am I opening myself up to accusations that I denying my family connection with her out of some (utterly-unearned) sense of genetic moral superiority? I might even be accused of blaming Jane for the ultimate fall from social grace of her husband and by extension the rest of his family. I could be blaming Jane for the crime of being a woman, and that would be bullshit. I could go in the other direction and say that Jane was a victim for being a woman in a man’s world, but while that argument might be made, but it also denigrates Jane’s character as someone who most definitely made her own choices in life.

Jane Develing is mentioned in two major works of Western Australian history, and in this regard she is well up on both her husband James and her most famous son Drewy. These two examples bookend her life with her second husband so they are well worth surveying: 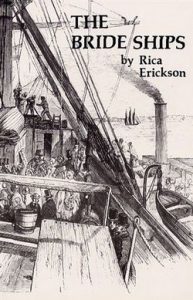 “The Bride Ships” by Rica Erickson (1992, Hesperian Press) starts with the arrival of Jane’s ship, the Mary in Fremantle on 25 October 1849.  Jane is described as “The most notorious of the servant girls […] evidently a person of some spirit…” (p11). The book explains the circumstances whereby young women were sent to the Western Australian colony for use as servants, or wives. Jane’s own origins are not explored, but it does describe her successful prosecution of a fellow shipmate on the voyage for assault after they had arrived in Western Australia. He was one of the “Parkhurst Boys”, juvenile delinquents assembled from Parkhurst Prison on the Isle of Wight. Unmarried Jane was heavily pregnant at the time of the assault.  The book then baldly records that she married a widower named Richard Edwards, then another widower called James Dyson, who later became a Perth City Councillor. The bit where the former and future husbands brawled in the street wasn’t mentioned.

The late Dr Rica Erickson was a wonderful historian. I wish Jane had been the subject of a whole chapter rather than a paragraph as I’m sure then we would all know a great deal more about Jane Develing and the Dysons than we do at present. 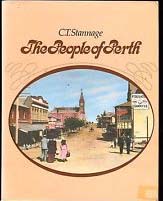 “The People of Perth” by C.T. Stannage (1979, Perth City Council) is an official history of the city commissioned by the council itself. Despite this, Stannage pulls no punches and the starchier councillors must have wondered what the hell they had just paid for. He does not not shy away from the seamier side of life that I am sure his sponsors would have preferred he had just glossed over. He takes up Jane’s story a little time after she had separated from her second husband. He uses Jane as a case study for women deserted by their spouses.

“… One such was Jane Dyson who, with her young daughter Anna, found employment with the wealthy butcher John Liddelow at his establishment on the corner of Barrack and Murray Streets […] Over a four month period Jane stole from Liddelow goods and cash to the value of £58. […] Jane was sentenced to imprisonment for five years. On her release she became one of Perth’s best known madams with a popular establishment in Stirling Street. The fate of her daughter Anna is only to be guessed at.”

The late Tom Stannage is pushing an agenda of social inequality with this story, but Mrs Jane Dyson is no Fantine from Les Misérables and Anna (actually Hannah) was no Cosette. In 1884 Hannah was twenty-eight, with a nine year old daughter also named Hannah. She had been divorced from her husband since 1877. In the appeal for clemency that Jane sent to the governor in 1885, Detective Police Inspector Lawrence raised a couple of salient points —

This petitioner previous to her conviction had been living apart from her husband for some considerable time— Cohabiting with an ex-convict named John Smith — and has done absolutely nothing, since leaving her husband and towards providing for the young children she mentions. — […]

The sum of £32. 10 — (part of the money stolen) was found in her box, when arrested, which she was Keeping for the purpose of paying her daughters passage from the neighbouring Colonies, in Conjunction with whom She intended opening a brothel in this City.

Mrs Jane Dyson was first and foremost, a survivor. She paid the males in her life— indeed the entire system she was forced to exist within— exactly same respect it, and they, afforded her: precisely none. I admire her for that. I also believe my admiration would have been absolutely irrelevant to her. When she died in 1901 her son Drewy gave her a fine headstone in the same plot with her late husband James and his first wife Fanny. But in her will, she left all her possessions to her surviving daughters. Jane had the last word.