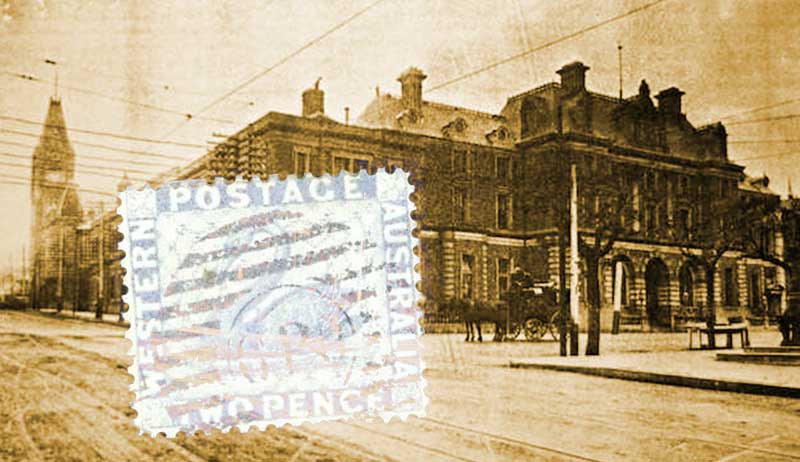 …About half-past nine last Friday night, my attention was attracted by a number of persons standing in front of prisoner’s brothers’ residence, in Murray-street; I was in plain clothes at the time, and Dyson’s sister — a little girl — came up to me and said that her brother Andrew was killing her Father;

The evidence of P.C. Grant.

When Joseph Dyson junior was thirteen years of age he would also have been present when his uncle Andrew entered his father’s home on the corner of William and Murray Streets and proceeded to beat up his grandfather.  Old James Dyson had lived with them for a few years now.  A man named Barker separated Andrew “Drewy” Dyson from his father. Drewy then went out into the street to hurl instead abuse of the verbal kind the gathering crowd. Finally, he returned inside the house and vented his frustrations on a small dog before the police arrived to haul him away.

Joseph’s step-grandmother Jane was seven months into a five year sentence for theft (being served in the old Perth Gaol just down the road) and  a few months previous, his uncle Matthew was sentenced in absentia for disorderly conduct. Matthew’s crime was to have thrown a rotten egg at a religious procession entering Wesleyan Church which was just across the street from their house. It was the same church Joseph’s father, Joseph the Elder, was a Sunday School teacher for.

All things considered, its not that strange that Joseph Dyson Junior might have had a jaundiced view of certain members of his family…

Scholastically he resembled his father. They both went to the same Perth Boy’s School, and were awarded similar prizes for their academic achievements. Back when they were all much younger, he and several of his aunts and uncles (many younger than he) had all marched together as school children for a parade celebrating the Queen’s Silver Jubilee (1879).

By 1888, the year his grandfather died, Joseph (aged 16) was playing Australian Rules football for a Perth team. In 1890 he was a member of a team called the “Pearlers”. Their captain was a lad only a year younger than Dyson called Strutt. Arthur Ernest Strutt had come from Melbourne, Victoria, to the west in 1885 with his widowed mother and several other siblings. He had a young sister, then aged twelve, called Jessie.

But Joseph junior was just as capable of being an idiot as any other member of his family. On the same day (11 May 1891) Uncle Drewy fronted court yet again, this time for nearly running down a clergyman, Joseph and a friend were before the same magistrate for allegedly firing a gun near a policeman. Fortunately for Joseph, this was his first and last offence. Soon he would have a very strong motivation for keeping his nose clean.

Sometime in the year 1892, Joseph Dyson joined the Western Australian Postal and Telegraph Service as as a letter-carrier. Although there is nothing to suggest that influence was applied either way, Dyson had an relative in this sphere of the public service. Mr Richard Tremlett Hardman (1848-1927) was married to his Aunt on his late mother’s (Elsegood) side. Hardman was a mail contractor during the 1860’s, postmaster at York for a couple of decades, then appointed an Inspector in July 1893. Later he would be the Chief Inspector, rounding out his career as Deputy Postmaster General.

Dyson’s career in the postal service was extremely respectable. By 1895 he was a mail assistant in the Perth General Post Office. By the time of Federation in 1901 he was head of the “Poste Restante” department within the GPO, a very responsible position. When the Western Australian Postal department was absorbed into the new Commonwealth Postal  service in June 1904, Dyson transferred to the new organisation, and retained his same pay grade: £180 per annum.

He could afford to marry and start a family. He had done so— to a now grown-up Jessie Christensen Strutt the ceremony taking place in the Wesleyan Church, Perth, on 7 February 1900. Their first house together they named “Hawthorn”, was in William street in the city. Their first child, a son, was born there on the 5 November 1900, a very respectable nine months later. His mother-in-law, Mrs Annie Strutt would die in this same house on 19 January 1901. She was a Scottish nurse who had run a respectable boarding house in Perth during her long widowhood. They moved to a new house in the fresh Perth suburb of Subiaco. Respectability mattered to this family. Yes, brother-in-law Arthur Ernest Strutt would abandon his wife and two children never to be heard of again, but the Strutts were respectable. Why, back in Tasmania, (where that side of the family had come from) they would become senior bureaucrats, politicians and brigadier generals during the 20th century.

But those terrible Dysons, they were nothing but trouble…

Previously in 1893, when Joseph junior was still attempting to establish himself as a public servant, yet another incident with his outrageous uncle Drewy ensnared his father this time. The venue was the newly opened St George Hall in Hay street; The performance was a play called “The Silver King”; The encore spilled out into the street and into the Police Court five days later.

In the decade after James Dyson’s death, Andrew “Drewy” Dyson had re-invented, if not redeemed himself. He was what he had become and he was that, gloriously and scandalously.  He owned a cart-manufacturing works located on a site directly across the road from brother Joseph’s store on the corner of William Street and Murray Street. The disagreement he had that evening may have had something to do with a dissatisfied customer (One of the milder obscenities he seemed to have uttered was something to do with it being “a b—— good cart”. It was obscene language, one word in particular that had landed him before the court (no, it is not repeated in the press).

A witness he summoned was Joseph, his brother, upstairs during the commotion. He had heard nothing, and testified so. Another was a lady named Emily Bates. Evidence likewise. However Miss Bates was also Drewy’s mistress, further; she was heavily pregnant with Drewy’s future son.  A month later she would be packed off to Drewy’s property in Wanneroo for the birth. Andrew Samuel Dyson would be raised by Drewy’s long suffering wife, Charlotte, as her own, with some assistance (not that anyone was judging them):

Drewy Dyson was the very antithesis of respectability, a well known racing identity in every sense of the term, then and now. Yet despite everything, he always remained close to his half-brother Joseph. Why, I’ve no idea. In 1910, on the centennial of their late father’s birth, they jointly placed a memorial in the local paper. They were proud of their father.

But Joseph junior was not proud of his relations. In 1893 he was attempting to cast off the inky shadow of father’s family, a task all the more difficult because they shared the same name. The week after the reports of the Court case were published, (Drewy was fined yet again) a classified advertisement appeared in the same paper:

Old Joseph Dyson finally passed away in 1912 aged 66 years, at his house in Robinson Street, North Perth. His son performed the required conventional pieties, and had him buried in Karrakatta Cemetery in the same plot as his late mother-in-law. No headstone was purchased. The grave is unmarked.

But it was the day after the funeral that the final rupture between Drewy and his nephew most likely took place. Drewy didn’t even bother to turn up to the resultant court case; he sent along his wife to plead guilty on his behalf. The magistrates were without sympathy (it was rare that they were) and the fine of £10 for obscene language (yet again) was a very steep one. The words were uttered outside a house in Robinson street, the house is not specified, nor the two witnesses who gave evidence against Drewy, but a good guess can be made.

As far as I can tell, from 22 May 1912, no member of the family of Joseph Dyson had anything to do with any of the surviving Dyson clan for nearly one hundred years.