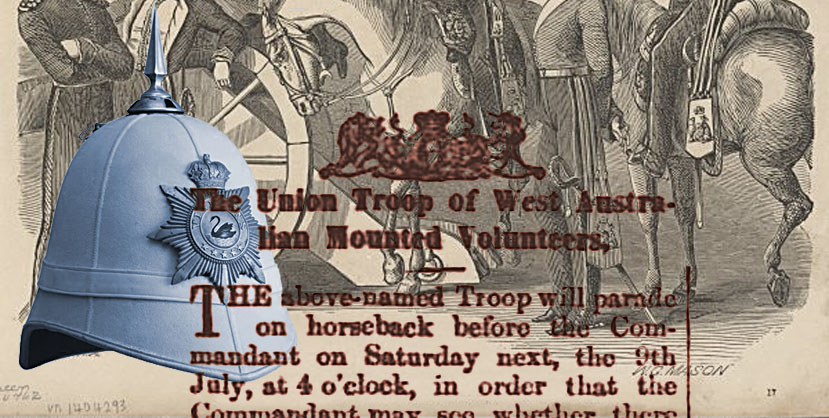 In 1869, the last two companies of the British army were finally withdrawn from Western Australia. With the departure of the 14th Regiment of Foot, horrified colonists were faced with the terrifying prospect that they might have to pay to expand their own police force. There were the pensioner guards, of course, who were retired or invalided out former members of the British Army, some veterans of the Crimean campaign of nearly twenty years ago, who had been sent out as settlers to the colony in conjunction with the convicts, part of whose duty it was was for them to guard. But by 1870, these 4000 odd pensioners and their families were scattered throughout the colony, and while some in the Enrolled Pensioner Guard still looked good on parade in Perth, their increasing decrepitude gave cause for concern.

Various volunteer militias had winked in and out of existence in various locations though out the colony over time. Since 1862 there was a volunteer force of riflemen in the city of Perth.

It would have been nice to have been able to tie in the call to form a cavalry troop in the city with the worsening international situation abroad, but in May 1870, the Franco-Prussian War was a little way into the future, so I cannot ascribe the desire for a new cavalry unit out of admiration for the funky Prussian headgear. On 25 May 1870 various Perth worthies signed a petition to Frank DeLisle, a ranking officer of the Pinjarrah Mounted Volunteers and perhaps more pertinently, aide-de-camp to newly-arrived Governor Weld (and his brother-in-law). Weld also brought with him the beginnings of representative government to the Colony, and one of those new representatives had his signature on that petition. Maitland Brown was a murdering bastard, and one of the most highly respected squatters in the colony because of it. Also on the petition (the last name, in fact), was a young man of 25. He was Joseph Dyson, son of the timber dealer and Perth town councillor, James.

Any troop of calvary was by its very definition, something of an elite or prestige unit compared to the humble foot-soldier. This elite status was to a large extent built in to it’s very nature as only volunteers of some means would have owned the requisite horseflesh to seat their superior rumps upon.

James Dyson was by now a horse owner of some note, he was regularly loosing track of them, or loosing races with them. All his sons must have been able to ride with various levels of proficiency. Andrew, Septimus and Octavius built careers around horse riding or horse ownership. George Towton, whose name was also on the petition, would become to be a race horse trainer of some repute. Aged only 17 in 1870, he was also the Dyson’s family’s next door neighbour in Perth.

Nowadays we know it only as a musical instrument, but back in the day it was the military title of the lowest-ranking commissioned officer. DeLisle was Cornet of the Pinjarrah Mounted Volunteers so he was gazetted Lieutenant of the newly formed Union Troop of Western Australian Mounted Volunteers. “From Captains to Colonels” by James Ritchie Grant (1991) notes:

This might be a little bit of an understatement. One of the delays in promulgating the new regiment was quite literally rain on their parade.  A new Cornet was appointed to the Troop, the gloriously named Cornelius C. Fauntleroy. It might have been there were too many chiefs and not enough Indians, for there were never more than fifty members of the troop and numbers fell as low as thirty at times:—

THIS UNION TROOP OF MOUNTED VOLUNTEERS.—We trust that this Corps which gave so much promise of success on its first establishment, will not be allowed to collapse for want of attention on the part of the officers ; drill is neglected, one worst signs[sic], and unless the officers shew more zeal in the company, it will certainly come to an untimely end. To the officers we say, persevere and you will succeed.

The members of the Troop finally gathered at the pub to elect some NCOs (Non-commissioned officers) and not a moment too soon, for one of it’s first official duties was imminent, to be a guard of honour to their leader’s brother-in-law, the Governor, during the opening of the first session of (semi)representational government:—

Shooting things off at ceremonial occasions would be the raison d’être of the Regiment.

In February of 1871, the decision was made to wield a big stick and institute fines for non-appearance on parade. As far as carrots went— Their fellow volunteers in the Rifles received an annuity for good service of about 16 shillings, a nominal amount but better than a poke in the eye with a burnt stick. I have yet to find evidence that their mounted brothers ever received the same compensation. However, there was always the side perk that the girls apparently loved a man in uniform… as was illustrated by a display the Troop put on for the inhabitants of Guildford, a few miles up the Swan River, in May 1871:

GUILDFORD.
From our own Correspondent.
This town was enlivened on last Wednesday afternoon by the Union Troop and Guildford Volunteers, who numbered in force, and went through their various evolutions in a creditable manner. It is seldom the Guildfordites have the opportunity of witnessing such an array of horsemen in military uniform, and a considerable amount of eagerness to have a glimpse prevailed ; especially (may I be permitted to say?) amongst the fair sex, to whom the attractions of a soldier are ever predominant. I hear that it is the intention of the above Troop to have alternate meetings once a month in Perth and Guildford ; which should have the effect of producing more energy, and augmenting the numbers of each.

Nudge, nudge, wink, wink, say no more, say no more…  Later that month, nearly on the first anniversary of the meeting that started it all, they paraded for the Queen’s birthday public holiday (This being H.M. Queen Victoria, of course). There was another special meeting of the troop held in a pub in September, where it was decided to change the days they assembled together and paraded.

And that was nearly the end of the story of the the Union Troop of Volunteer Cavalry.  In June 1872 DeLisle was replaced by a Captain Blundell, a man with an appropriately absurd string of first names. C. C. Fauntleroy’s name was already silly enough, so he was retained as Cornet.

Blundell was an British army officer with Artillery experience, so less than a month after his appointment the Cavalry troop were no more, replaced in name, but not in purpose, by the Western Australian Troop of Horse Artillery. Firing canon at celebrations was their primary activity, budgets being such that practice shots in anger were limited to one firing a year. Never the less, all mocking aside, this volunteer force did survive in various iterations to eventually be rolled into the new army of the Australian Commonwealth in 1903 as the No1 WA Battery Australian Field Artillery.

1872 was a year of economic problems in the west. To balance the books, the government abolished the tiny stipend paid to the Perth Volunteer Rifles, and presumably the other units as well. Their Captain resigned in disgust and the whole regiment was disbanded for ‘insubordination’. This may be significant for the Dyson story for the following reason—when it came time for the volunteer’s rifles to be collected, one could not be accounted for. An Enfield rifle issued to Private William Elsegood was not returned, and if the matter was ever resolved, record of it is not surviving in the official correspondence. It was still missing by November…

This W. Elsegood could be one of two people: William James Elsegood was 27 in 1872, a carpenter and builder who would go on to construct part of the overland telegraph line to South Australia; or his father, William Hunt Elsegood,  52 years of age,  a carter in town, but before that a Lance Corporal in the 96th Regiment of Foot. Elsegood was posted to the colony back in 1847 but stayed on as a civilian to raise a very large family. He had a daughter called Mary Ann, who was born in Perth, and by 1872 was aged 19.

Mary Ann suddenly gave birth to a son on the 17 August 1872. A few weeks later she married Joseph Dyson in Perth on 2 September. Note the order of events. The child was named Joseph Dyson junior.

Now, there are a lot of gaps in the record. We know Joseph Dyson had something to do with the setting up of the Union Troop of Cavalry, but there is no evidence as yet for (or against) him actually being a member of the troop, and if he was a member, how long did he serve? But I would like to think that a gallantly attired cavalryman might have caught the eye of the teenaged daughter of an old soldier…

…then later on the father (or the brother) used the display of a bit rogue ordinance that just happened to be in their possession to ensure the young buck did the right thing. Nearly a literal shotgun wedding? The romantic in me likes to think so.